The Difference between Voluntary and Involuntary Bankruptcy by Sini @LexCliq 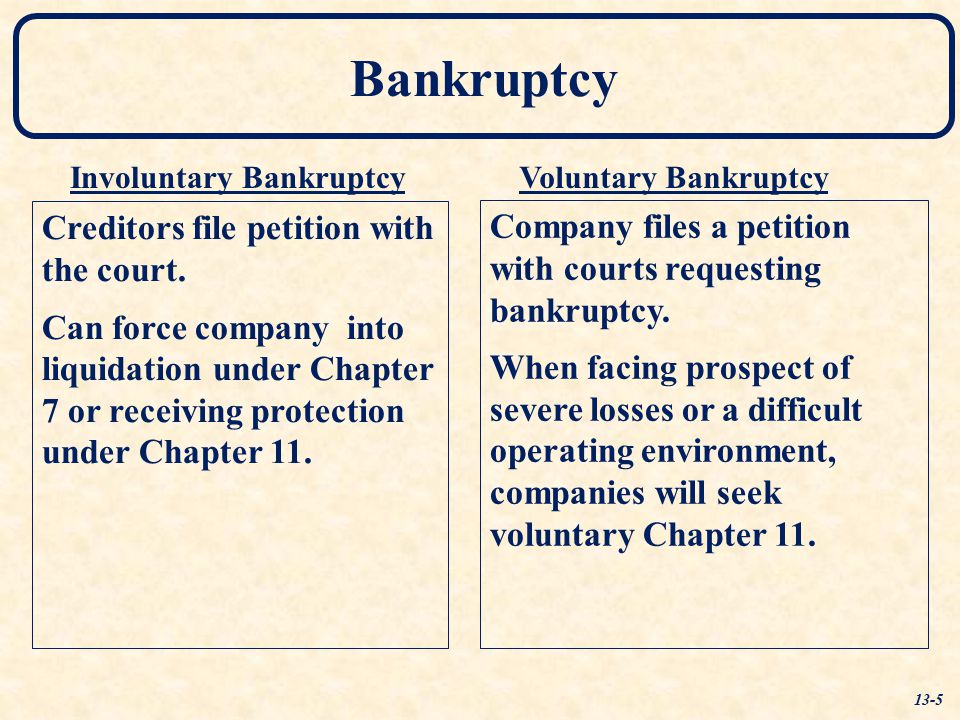 Bankruptcy can be complicated and overwhelming for a person or a company. It may sound difficult to get over a debt trap but it has become attainable with the arrival of the Insolvency and bankruptcy Code. The solution to bankruptcy has to be two ways:

(i) Voluntary Bankruptcy; and

Initially, bankruptcy was designed to restore the creditor’s financial value. It ultimately grew and voluntary bankruptcy came to the fore, helping debtors to relieve themselves of their debt trap.

This stigma primarily existed in regard to firms who could not pay their creditors’ debts. It was even referred to as unethical and was morally subject. That view altered considerably with time when cash flow grew in the Indian economy. Cases of bankruptcy have grown with thriving incomes and more cash interchange. A strong law was therefore needed to address these defaults.

In 2015, Dr. TK Viswanathan chaired the Bankruptcy Law Reform Committee. The Committee focused primarily on reviewing the existing policies and developing a coherent insolvency and bankruptcy structure for individuals and other legal organisations. In November 2015, the Committee presented its report to Late Shri Jaitely, then Minister of Finance. On 21 December 2015, Shri Jaitely presented the Lok Sabha report.

On 23 December 2015, the report was also submitted to the Joint Committee. In Lok Sabha and Rajya Sabha, on 5 May and 11 May 2016, the Insolvency and Bankruptcy Code was effectively adopted, with a majority. The code was also approved by the Chairman

The Insolvency Law was introduced in 2016. The Bankruptcy Code, 2016 (IBC), has modified the way corporations seek aid on insolvency and debt decisions. Insolvency Code, 2016. The preference for bankruptcy was to take a loan from banks, which used to be the most popular credit culture. Nowadays, bankruptcy of outstanding debt solutions is a frequent activity of a company or individual.

The concept of bankruptcy

In Layman’s terminology, bankruptcy can be defined as a legal process in which a person or corporation unable to pay their creditors’ existing debts receive a debt relief. Failure is a legal status in which the outstanding obligations of an enterprise, an individual or an organisation to the creditors cannot be compensated. If the corporation, firm or organisation is unable to pay its loan back and the liabilities ratio is considerably higher than its assets, an insolvency procedure is launched. Debt failure to pay can lead to mental distress and a general illness, which needs to be remedied for a company and individual to perform properly aynd defend their rights.

Meaning of voluntary and involuntary bankruptcy

Objective and scope of voluntary and involuntary bankruptcy

Roles and responsibilities in voluntary and involuntary bankruptcy

Process of bankruptcy under the Insolvency and Bankruptcy Code, 2016

Applicability of the Insolvency and Bankruptcy Code, 2016

The provisions of the IBC are applicable in bankruptcy in the following entities:

If you have any desire to work on your psychological and actual wellbeing, you can beyond a shadow of a doubt trust Troy Aikman CBD Gummies. Assuming you consume biting gum in the perfect sum, you can work on your way of life. The most outstanding aspect of gummies is that they are 100 percent regular […]

Troy Aikman CBD Gummies are a reasonable extraordinary and hearty course of activity. They incorporate present day and standard adornments to address or fix logical issues. You need to kill the cannabinoids from the plant with exorbitant mindfulness. It very well might be joined with first rate trimmings to make it extra enormous and taste […]

Sweet Relief CBD Gummies are packed with clean and natural active ingredients to keep the human body healthy and stimulated for normal functions, as well as to reduce pain and discomfort caused by problems. This pure and organic CBD supplement removes many impurities from the human body as well as allows the human body to do […]