Like private nuisance, public nuisance can be the result of negligence or intentional activity. Courts will also scrutinize factors like the kind of neighborhood, the nature of the harm, and the proximity to those who are injured. However, a major difference from private nuisance concerns who may sue to recover damages. Since the impact of the nuisance is felt by the public, the law limits the right to sue to:

For example, in the 1970s, an oil tanker ran aground on the coast of Maine, releasing 100,000 gallons of oil into the water. The result was an environmental disaster, devastating local marine life and severely impacting a town’s tourism industry. Local fishermen sued for loss of livelihood and hotel and restaurant owners sued for loss of business from visitors to the area. The court ruled that the spill constituted a public nuisance because it deprived the local community of the full use of the public coastline. The court determined, however, that only the fishermen and those earning their living directly from the ocean could successfully sue under a public nuisance theory. Unlike the hotel and business owners, who were impacted indirectly in the same manner as the public at large, the fishermen suffered distinct harm, different in kind than the harm suffered by everyone else. 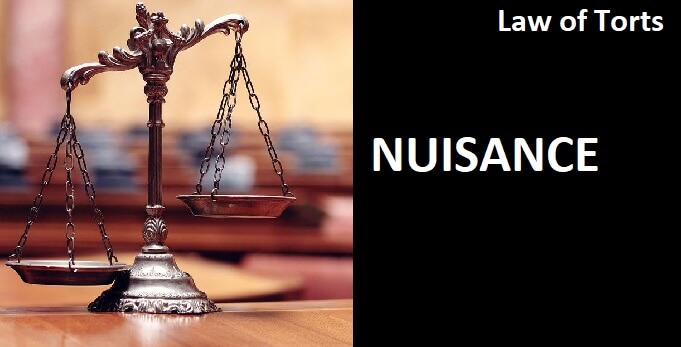 There are several defenses available to those accused of creating a nuisance. One important defense is called ‘coming to the nuisance’. It applies when the harmful activity was operating before the plaintiffs acquired the property impacted by the nuisance. If the owners were aware of the nuisance-creating activity at the time they purchased the property, the defendant may invoke the defense of ‘coming to the nuisance’. This defense effectively argues that the plaintiffs knew what they were getting themselves into and assumed the risk of harm. While in the past, ‘coming to the nuisance’ was considered an absolute defense, today it is a factor that the courts will consider in determining whether the plaintiffs may recover for nuisance. An example of this manifested in Foster v. Preston Mill Co., wherein blasting from a nearby timber farm caused minks to panic and attack each other. As the farm existed before the ranch housing the minks, there was no liability for nuisance.

The plaintiff in a nuisance case can recover damages for harms suffered. The creator of the nuisance will be liable for compensatory damages, covering the value lost due to the nuisance and any reduction in property value. In addition, if the nuisance is an ongoing activity, the court may issue an injunction ordering the harmful activity to cease.

Just as courts may consider social utility when determining liability, courts may consider social utility when determining the appropriate remedy. Even if the activity in question has been ruled to be a nuisance, the courts may permit it to continue if the utility of the activity outweighs the harm to the plaintiff. In such cases, a court will not issue an injunction, but will instead order the creator of the nuisance to make ongoing payments to the plaintiff. Effectively, the law forces the plaintiff to bear the consequences of socially useful enterprises but requires that the plaintiff be compensated for the harms.

Consider the case of Boomer v. Atlantic Cement. The plaintiff represented a group of landowners who sued because dirt, smoke, and vibrations from the defendant’s cement plant interfered with the use of their property. The court ruled that the damages to the property did constitute a nuisance and held the plant owners liable. However, the court reasoned that the plant employed 300 people and calculated the worth of the plant to be over $45 million. By contrast, it determined that the plaintiffs suffered approximately $185,000 in damages. So, forcing the plant to cease activity would be economically disastrous. Therefore, instead of an injunction, the court allowed the plant to continue to operate but ordered the plant owners to make permanent, ongoing damage payments to the plaintiffs.

Nuisance is a complex area of tort law, involving questions of law, society, and economics. It potentially covers any conduct which has a significant, detrimental impact on the use of property, so the range of nuisance cases can be very broad. Courts have taken different approaches to questions of nuisance, so the legal analysis will vary depending on which jurisdiction the case is brought.

Derma PGX – What Is Derma PGX & How Does It Resolve Anti-Aging Cream Function?

We acquire many acknowledged stuff as we progress in years, however we additionally get issues we never needed to have, including perceptible maturing pointers, which simply harm your normal excellence and turn your brilliant skin tasteless and unappealing. We scarcely possessed energy for their skincare in view of our weighty responsibility and expanded working hours. […]