In every country, laws are necessary for the maintenance of peace. So, the laws ought to be observed by every citizen. But there are some elements in every society that do not pay any heed to the laws of the land.

The policeman is entrusted with the task of maintaining peace and harmony in society, arresting and controlling people who violate laws. He enforces the laws of the land. One who does not obey the law is punished by the police, It is because of policemen that our lives and property are safe. Hence, a policeman is important for the smooth running of any society. He acts as a savior of society. 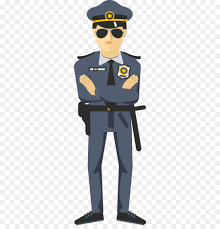 A policeman is usually a man of sound health. He wears a uniform and carries some weapons like a rifle or pistol. He has a belt around his waist. The policemen of every state of India can be distinguished by their different official symbols.

A policeman is assigned various jobs at the police stations or check posts. He is also posted at that point in the town or city where there is fear of some disturbance or arson. During public demonstrations and strikes, he plays a decisive role. When the crowds become violent, he also uses his Lathi (stick) for controlling the mob. If the situation deteriorates, he may resort to firing with the permission of his superiors. Policemen also provide special protection to political leaders, VIPs, and any common man in case of some special need.

The police force as a whole is on duty round the clock. Though each person works in shifts, a policeman’s work is a tough one. He is considered to be the custodian of law and order. He maintains peace and harmony. He is tough with those who violate discipline and cause disorder and unrest. He remains on duty during the cold winter nights and chilly mornings. His duties are manifold. He settles disputes and brings two warring parties to the point of reconciliation. He also protects the sanctity of religious processions and keeps the miscreants and hooligans away. In fact, he is an enemy of all those who indulge in any anti-social activity. He is the protector of the poor and the weak.

The policeman’s job is a long and tough one. It is also a very responsible one as we all look up to him for protection. He is the real guardian of the civil society of the nation.

Despite the new democratic, secular, socialistic, welfare, and humanitarian values vouched for in the Constitution, the Indian police, by and large, follow the philosophy of Para-militarism associated with the mechanism of awe, threat, and coercion.

In other words, the democratic philosophy of the Constitution hardly gets reflected in the organization of the Indian police. The police and society have drifted apart from each other thus weakening the sound foundations on which alone can be built an efficient and competent police system. Police

“ In India Believe More On Fists Than On Wits And On Torture More Than Culture, More On Brawn And Not Brain”

Kudo Zero Sugar Collagen Gummies (#1 Age Reversal Formula) Did You Use Or Not?

Official Website: Click Here Everyone wants to look as youthful as they feel. Skin is the main thing that enhances appearance and creates an impression. Aging is a common factor in everyone’s life. Lack of collagen in your body makes your skin dull, hair-thin, nails brittle, provides joint discomforts, and more. Have you gone through […]