Joe Biden vs. Elon Musk in war of words over state of US economy now

Who are you gonna believe: the world’s richest man or the president with plunging poll numbers?

Billionaire Elon Musk has such a “super bad feeling” about the U.S, economy under President Biden that he plans to lay off about 10% of the workers at his Tesla electric car company, it emerged Friday.

Biden reacted to the tech mogul’s gloomy outlook with sarcasm — and then took a jab at his SpaceX company’s upcoming mission.

Joe Biden vs. Elon Musk in war of words over state of US economy “Lots of luck on his trip to the moon,” Biden said of Musk during an extended weekend trip to his Delaware beach home.

Musk snarked back on Twitter with a link to a 2021 NASA press release about SpaceX winning a $2.89 billion contract to send the next American astronauts to the moon in preparation for an eventual trip to Mars, where Musk plans to establish a human colony.

“Thanks Mr President!” he added.

The war of words erupted against the backdrop of Musk’s new status as the No. 1 enemy of progressives, who are infuriated that he plans to buy Twitter and turn it into a platform for unregulated free speech, which proponents say would give conservative viewpoints a footing on the liberal–dominated social media site.

On April 15, Sen. Elizabeth Warren (D-Massachusetts) sarcastically wished Musk a “Happy Tax Day,” noting that he reportedly paid no federal income tax in 2018 — even though he said he’d pay a record $11 billion on his 2021 earnings.

Rep. Alexandria Ocasio-Cortez (D-NY) has also accused Musk of having “an ego problem” and last week told Bloomberg she wanted to ditch her Tesla Model 3 for an electric vehicle made by unionized workers.

Musk is an outspoken opponent of unions who recently tweeted that he planned to stop voting for Democrats “because they have become the party of division & hate, so I can no longer support them and will vote Republican.” 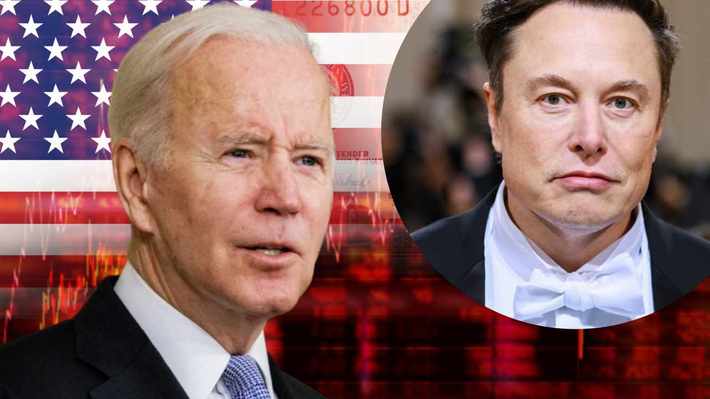 “Now, watch their dirty tricks campaign against me unfold,” he added.

On Friday, Reuters said it obtained emails showing that Musk told Tesla executives on Thursday to “pause all hiring worldwide.”

In a follow-up email to employees, Musk said that the company would reduce its salaried headcount by 10% because it’s “overstaffed in many areas” but that “hourly headcount will increase,” according to Reuters.

“Note, this does not apply to anyone actually building cars, battery packs or installing solar,” Musk reportedly said.

Tesla and its subsidiaries employed nearly 100,000 people last year, according to a Securities and Exchange Commission filing that didn’t break down the numbers of salaried and hourly workers.

Musk’s emails followed repeated warnings from him that the US faced the risk of a recession.

“Elon Musk has a uniquely informed insight into the global economy. We believe that a message from him would carry high credibility,” Morgan Stanley analyst Adam Jonas said in a report.

And while demand for Teslas and other electric vehicles has remained strong, analyst Frank Schwope of the German bank NordLB said, “It is always better to introduce austerity measures in good times than in bad times.”

“I see the statements as a forewarning and a precautionary measure,” Schwope added.

Other leading execs have also been warning about the possibility of an American recession amid inflation that last month surged to 8.5%, the highest it’s been in more than 40 years.

“That hurricane is right out there down the road coming our way,” JPMorgan Chase chairman and CEO Jamie Dimon said Wednesday.

Biden — who scored a dismal 40% approval rating in a Rasmussen Reports poll Friday — contrasted Musk’s corporate cutbacks with Ford’s Thursday announcement that it planned to add 6,200 factory jobs in Michigan, Missouri and Ohio to boost production of electric vehicles.

“While Elon Musk is talking about that, Ford is increasing their investment overwhelmingly,” he said.

Biden noted that the new hires would be “union employees, I might add.” The president also touted the May jobs report released by the Labor Department on Friday, saying that the U.S. had made “the most robust recovery in modern history.”

“The job market is the strongest it’s been since just after World War II,” he claimed.

The monthly statistics showed the nation’s employers continued their hiring streak by adding 390,000 jobs, keeping the unemployment rate at 3.6%, just above a half-century low.

But while job growth remained steady, May’s number marked the lowest monthly gain in a year and stock market indexes fell on expectations that the Federal Reserve would continue raising interest rates in a bid to ease inflation.

The Fed’s moves have already caused mortgage rates to spike, pushing down home sales, and increased the cost of borrowing for businesses seeking to invest in new buildings and equipment in the wake of the COVID-19 pandemic.

Biden was pressed on the subject of inflation, a key factor in his pathetic poll numbers.

“There’s no denying prices, particularly around gasoline and food, are real problems,” he said.

“I understand that families who are struggling probably don’t care why prices rose. They just want to bring them down.” President Joe Biden on Friday brushed off economic warnings from Tesla CEO Elon Musk and JPMorgan Chase CEO Jamie Dimon as he touted May’s jobs report, saying the nation is likely to see more moderate gains as his administration struggles to get a handle on high inflation.

The President argued the nation is entering a new phase of “stable, steady growth” amid its recovery from the coronavirus pandemic as he touted Friday’s jobs report that showed the US added 390,000 jobs in May and the unemployment rate stayed at 3.6%.

Biden pointed to new investments and jobs added from Ford, Chrysler and Intel when asked about Musk’s recent comments that he has a “super bad feeling” about the economy and wants to cut about 10% of jobs at Tesla and Dimon’s warning that the economy is headed for a “hurricane.”

“While Elon Musk is talking about that, Ford is increasing their investment overwhelmingly. I think Ford is increasing investment building new electric vehicles, 6,000 new employees — union employees, I might add — in the Midwest. The former Chrysler corporation … they are also making similar investments in electric vehicles. Intel is adding 20,000 new jobs making computer chips,” Biden said.

“So, you know, lots of luck on his trip to the moon,” the President said about the SpaceX CEO. Musk responded to that barb in a tweet, linking to a 2021 NASA news release announcing its partnership with SpaceX for its Artemis program to develop a commercial moon lander and saying, “Thanks Mr. President!”

As the President touted last month’s jobs report and projected confidence in the nation’s economic trajectory, he also acknowledged many Americans “remain anxious” about high gas and food prices.

Biden again placed blame on Russian President Vladimir Putin’s unprovoked invasion of Ukraine, while also saying, “I understand that families who are struggling probably don’t care why the prices are up. They just want them to go down.”
The President assured the American people he was doing “everything I can on my own to help working families during this stretch of higher prices,” but urged Congress to pass proposals he has put forward to lower costs. 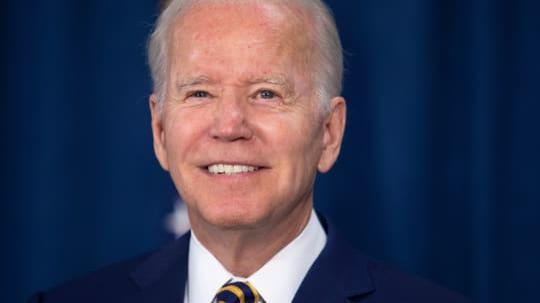 The tempering of expectations about economic gains from the President comes as inflation is running at a near-four-decade high and concerns about a recession are mounting. In order to help get inflation under control, the Federal Reserve said it would hike its interest rates by a half-percentage point — the largest jump in 22 years.

“We aren’t likely to see the kind of blockbuster job reports month after month like we had over this past year, but that’s a good thing. That’s a sign of a healthy economy,” the President argued.

Earlier this week, US Treasury Secretary Janet Yellen acknowledged she had failed to anticipate how long high inflation would continue to affect Americans. Yellen told CNN’s Wolf Blitzer that she was “was wrong then about the path that inflation would take,” when asked about her comments from 2021 that inflation posed only a “small risk.”

A number of top economic aides to the President have been taking to the airwaves to push the message that Biden is focused on bringing down consumer prices in an attempt to boost the President’s low approval ratings. The White House recently launched a month-long effort to signal heavy focus on the economy less than six months out from this fall’s midterm elections.

If your back pain is found Kerassentials right throughout for over three months, then the reason regarded getting chronic. A must to car loans of is whether or not you are suffering from a herniated disc. This can, in essence, deliver more complications if you seek handling. More bad news is the reality a simple […]

11 Easy Ways To Make Your Child Focus On Studies

Soybeans have been a favorite food in Asian countries for thousands of years. Only in the last few decades have they become popular in the West. Thus, only a few people have learned about soybeans and their benefits. So we decided to look at some of the soybeans' most important nutrition facts. Keep reading! What […]