Nootopia CollaGenius Review : Does it agitate you to know that you can’t seem to give your full attention to work? The combination of brain fog, low energy, focus, anxiousness, and/or stress negatively influences productivity levels and one’s drive and confidence. Things only worsen when nutrient deficiency results in poor hair, skin, and nail health into the equation. What can be done to rectify, and if not, at least alleviate this situation? This review aims to introduce a multipurpose supplement to address the aforementioned health implications. Here’s everything there is to know about Nootopia CollaGenius. 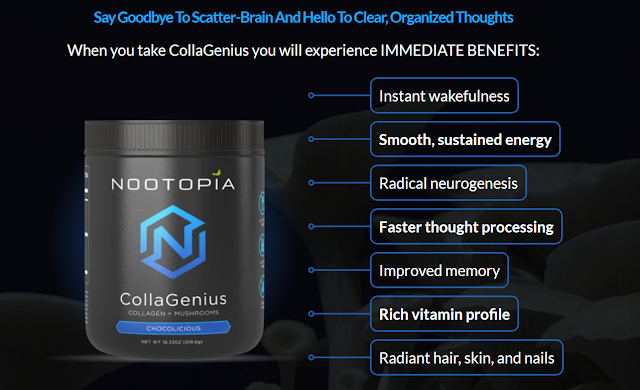 Developed by Nootopia, CollaGenius® is a collagen-mushroom neurogenesis drink believed to promote maximum brain power, stronger immune function, and healthier skin, nails, and hair. Our editorial team was surprised that each drink comes out to roughly 1.2lbs of concentrated raw mushrooms. It’s no wonder the makers, biOptimizers™ insist that the “brain will quickly start being able to process things in an optimized, structured way.” Having said that, to understand the neurogenesis aspect of CollaGenius™, we must first familiarize ourselves with biOptimizers™ thought process.

The CollaGenius® formula is twofold. First, it targets the brain-derived neurotrophic factor (BDNF) for optimal brain function. Why? The makers maintained that the BDNF is involved in neuronal survival and growth, neurotransmitter modulation, and neuronal plasticity. Without these factors, learning or recalling information will be difficult. As with any critical component in the body, the aging process decreases BDNF levels.

Second, Nootopia CollaGenius replenishes collagen availability in the body. Collagen is a naturally produced protein found in the cartilage, knees, elbows, part of the ribs, skin, hair, and bones, to say the least. To produce this protein’s helix, the body requires proline and glycine as the main pillars, along with vitamins and minerals such as vitamin C, zinc, and copper, explains one source. One source that elaborated on the culprits of a collagen deficiency revealed them to be aging and diet. From the mid-twenties onwards, collagen production is thought to decrease by 1% with every one-year increase in age.

While making healthy diet choices might help the body overcome some of the stress imposed, natural synthesis decreases, achy joints, skin lines, and many others will still surface. All things considered, a 2019 systematic review compiled and reviewed studies dating to 2019 revealed promising results. To be more specific, the researchers arrived at the conclusion that collagen supplementation is highly likely to increase skin elasticity and thickness, hydration, and dermal collagen density.

Clearly, biOptimizers™ thought process aligns with available science on BDNF and collagen, which is a sign of great acceptance. With this reassurance, we can now proceed to the ingredient list.

What ingredients are inside CollaGenius®?

CollaGenius® supports a blend of mushrooms and collagen. Each serving not only contains Marine (200mg) and Bovine (2,450mg) collagen sources but also:

Lion’s Mane – 50:1 (2,600mg) – Lion’s mane is a type of medicinal mushroom celebrated for its antioxidants and beta-glucan sources. Findings derived from animal, test-tube, and small clinical studies have linked the mushroom to alleviated symptoms of Alzheimer’s disease, Parkinson’s disease, anxiety and depression, regulated cholesterol levels, and reduced inflammation, among others.

In the context of brain function, one source referenced a 2009 study where researchers assigned 30 subjects with mild cognitive impairment to either the treatment (1,000mg of Lion’s mane) or placebo group for 16 weeks. Subjects took cognitive tests at the 8, 12, and 16-week marks. Consequently, evidence for a significant improvement in scores on the cognitive function scale in the treatment group compared to the placebo group. It is important to note that a month later, the scores allegedly dropped. Thus, continued use might be required.

Chaga – 100:1 (1,500mg) – Chaga mushroom is a fungus growing mainly on the bark of birch trees. Its medicinal properties have supposedly paved the path to improved immunity and overall health. Some scientific evidence demonstrated Chaga’s ability to reduce long-term inflammation, fight bacteria and viruses, and regulate the immune system (by stimulating white blood cell production). Why does inflammation matter?

A 2017 study investigated dietary patterns associated with inflammation and wanted to see whether diet is associated with cognitive decline. The researchers identified an inflammatory dietary pattern in those who took red meat, processed meat, peas and legumes, and fried foods. These were the same people with accelerated cognitive decline at older ages. This study is just one example of the source and impact of inflammation on cognitive function.

Cordyceps – 100:1 (1,500mg) – Cordyceps is a genus of parasitic fungi that has long been deployed in traditional Chinese Medicine. This type of mushroom has been scientifically proven to exhibit anti-aging effects. How? Its antioxidant content is believed to improve memory and sexual function. Antioxidants work by neutralizing free radicals, which is key because they will give rise to oxidative damage and thus, contribute to aging. Cordyceps might also be useful as an anti-inflammatory agent, making it somewhat comparable to the role of Chaga.

In search of more answers, our editorial team stumbled upon a 2018 mice study. Researchers were curious to see how Cordyceps militaris improves learning and memory. This brings us back to the importance of antioxidants. In particular, the researchers found that improvement in learning and memory is possible by scavenging oxygen-free radicals. This would prevent oxidative damage and protect the nervous system.

Reishi Extract – 100:1 (1,100mg) – Of all the mushrooms inside CollaGenius®, the Reishi mushroom is globally renowned. Once again, studies have demonstrated the power of antioxidants for more than just improved immunity. In addition, Reishi has been linked to enhanced gut microbiota, may provide assistance in managing symptoms linked to chemotherapy, and might lower blood pressure. A 2017 study that looked at the oral administration of polysaccharides derived from Reishi reported that the mushroom extract could be used as a regenerative therapeutic agent for cognitive decline associated with neurodegenerative diseases.

How much does CollaGenius® cost?

biOptimizers™ bundle options for Nooptopia CollaGenius®, which can only be found on the official website, are as follows (before any applicable shipping and additional charges by country): 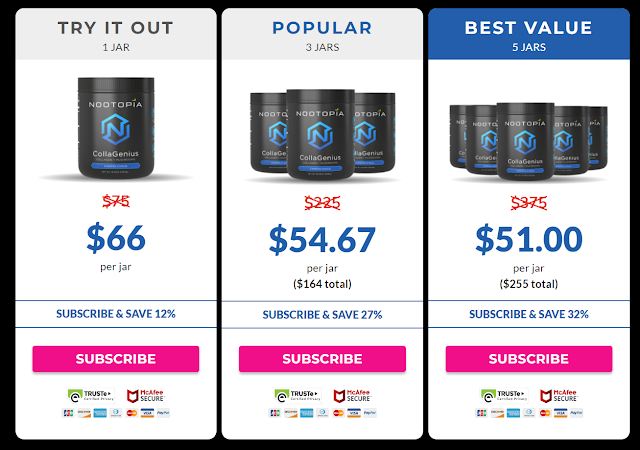 biOptimizers™ is an embodiment of a heartfelt story. The digestive health-focused company was founded by President and Co-Founder Wade Lightheart, who lost his sister at a young age to cancer. The phenomenon changed how he viewed health. Deep down, he knew that people on a global scale are likely to neglect wellness, which is a narrative he wanted to change so badly. Luckily for him, his first crack at those above came in the form of a mission to help his best friend, Matt Gallant, who also happens to be the Co-Founder of biOptimizers™, with his weight management goal.

The two took it among themselves to start a company that offered fitness programs, digestive enzymes, and plant-based proteins. They joined forces with an in-house group of scientists to ensure that every supplement they launched was the best in that category. How does a solution become the best? According to the duo, it all rests in biological optimization, hence, the name “biOptimizers™.” Specifically, their solutions have been designed to equip our cells and organs with the essentials for superior health.

Just like that, the brand gained popularity and support from major leaders. CollaGenius® is a dietary supplement offered by a biOptimizers™ nootropic-focused brand called Nootopia. Nootopia’s mission is as simple as wanting to “help activate and maximize your genius,” and the team believes this has been reached thanks to a series of high-performance formulas. All-in-all, there’s no room for doubt and wishful thinking, only actionable steps, which are fundamental for reaching a healthy mindset for a healthier and happy self.

Based on the analysis above, the CollaGenius® formula takes different routes for optimal cognition and healthy skin, nails, and hair health. First, it provides nutrients that scavenge free radicals and eliminates inflammation, both of which have been shown to trigger aging processes and cognitive decline. These nutrients are found in the form of medicinal mushrooms, housing antioxidant, and anti-inflammatory properties. 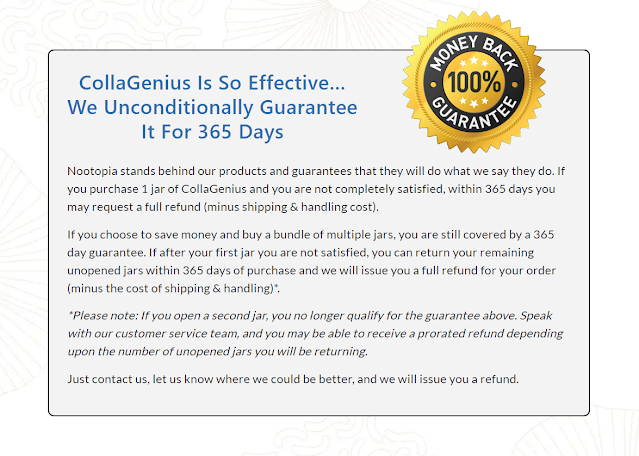 The second component of this formula addresses collagen deficiency. This outcome is not only a direct consequence of aging but also dietary choices. Both marine and bovine collagen sources have been selected to help the body stimulate collagen production. In our opinion, biOptimizers™ strategy is scientifically valid, which is reassuring.

Regarding the brand, biOptimizers™ is well-established, transparent in its processes and labeling, offering protection (i.e., money-back guarantees), and are actively educating the masses on the importance of certain nutrients. Put differently, the brand remains true to Wade’s and Matt’s mission to promote healing and to cherish health. This has also been reflected in their more recent nootropics line, Nootopia.

In accordance with everything, individuals need to prioritize their lifestyle choices with age, as the body relies solely on said decisions to either ameliorate or deteriorate one’s health. A possible first step might to assess Nootopia’s CollaGenius®’ role for better health.