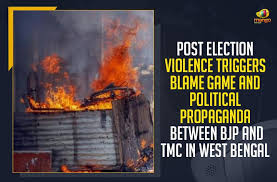 Following the announcement of the assembly election results, West Bengal saw sporadic acts of political violence. The TMC, which is in power, and the BJP, which is in opposition, have been accusing each other of attacking their workers. Following a group petition alleging post-poll violence in the state, the Calcutta High Court instructed the chairperson of the National Human Rights Commission of India (NHRCI) to investigate.

Later, the West Bengal government petitioned the court to overturn a judgment issued earlier in relation to a number of PILs alleging relocation of people, physical assault, property destruction, and ransacking of offices as a result of post-poll violence.

Violence can be defined as the use of harmful physical force to injure, vandalize, damage, hurt, destroy or abuse intentionally. World Health Organization also defined the definition of violence as “the intentional use of physical force or power, threatened or actual, against oneself, another person, or against a group or community, which either results in or has a high likelihood of resulting in injury, death, psychological harm, or deprivation”.

A look back into history doesn’t give the idea of the present scenario but it helps to prepare us for future scenarios.

Many current leaders do not even recognize violence in West Bengal. According to the facts of many newspapers and articles, on 2nd May 2021 when results came out, simultaneously in West Bengal incidents of violence came out from various villages of West Bengal.

In reality, some victims claimed the police were present at the scene of the event but did not assist them to stop the crime. Despite these data, authorities claim that there was no violence in West Bengal. This is called whitewashing. And after the history of violence, this is known as Criminal Whitewashing.

Some people even posted old photographs and videos of the violence, which was unethical, but it doesn’t rule out the possibility that something happened.

Over 2,000 advocates requested Chief Justice of India N.V Ramana to set up a committee to look after the post polls violence that occurred in West Bengal and to register FIRs of the people.

Around 150 people have given a memorandum to the President of India and said “We are greatly disturbed by the mindless instigation of reported violence in electoral vengeance against the people who exercised their democratic right to vote for one political party or the other.”

It is a data collection approach in which evidence is acquired via an alternate path and then individuals are asked to vote on the data individually. This method filters out evidence that is incorrect. Ultimately correct evidence reaches the court.

The NHRC committee provided a sealed report to the court, which will be shared with the State Council. The committee also requested extra time to write a thorough report, which will be presented by July 13th and would include all of West Bengal’s impacted districts. West Bengal election deserves a quest for truth.

The questions that now confront us are: Has Bengal’s law and order broken down to the point where rape victims must seek justice outside the state? Violence against women in Bengal is no longer merely a political issue; it has now evolved into a broader human rights issue.

Is Bengal, which is led by a woman chief minister and boasts of having the largest number of women MLAs in a state assembly, willing to acknowledge this? Is Bengali civil society ready to start a campaign against it?

The Amarose Skin Tag Remover is the cutting edge serum made customarily with best grade of updates and standard concentrates to beat the making skin issues. You can recover the wavering and shining skin that you genuinely care about. It hinders the harms and reestablishes the skin prospering with generally speaking around that truly matters, no typical […]

Facts about Hijr Ismail or Hateem in Makkah

Hijr Ismail, sometimes referred to as the Stone of Ismail and Hateem, is a white marble wall in the shape of a semicircle located directly opposite the northwest wall of the Holy Kaaba. However, it is not joined to that wall. It was there that Holy Prophet Ibrahim (PBUH) constructed a house for his wife, […]