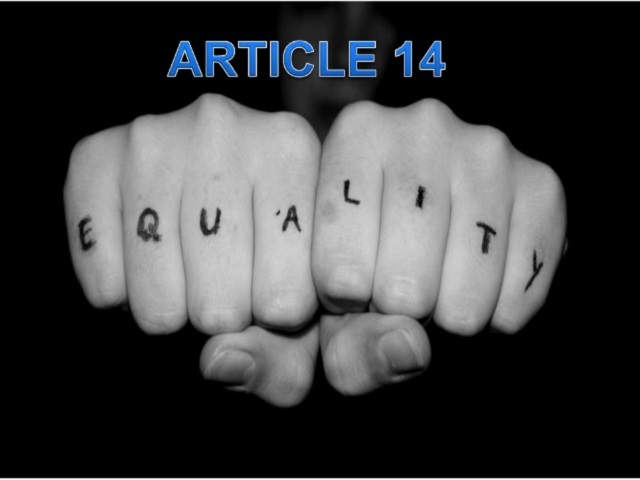 The framers of the Indian Constitution included a provision for people’s equality because every human being is born equal. Article 14 is one of the most important provisions in the Indian constitution, and it creates the golden triangle of the Constitution alongside Articles 19 and 21.

This right is particularly essential in India since there has always been a huge socio-economic divide. Persons have been discriminated against because of their gender or religion, therefore Article 14 was added to the Constitution to address these disparities and ensure that all people are afforded equal protection under the law.

There are no special privileges granted to any specific group of individuals under it, and everyone is subject to the same legal rules regardless of their status. As a result, no one is above the law of the land/lex loci, and everyone must follow it.

As a result, both of these statements obligate the state to provide equal treatment. The Supreme Court clarified in Sri Srinivas Theatre v. Government of Tamil Nadu that while these phrases appear to be the same, they have different meanings. The notion of equality before the law is a dynamic one with many facets, one of which is that there should be no privileges or people who are above the law.

The principle of equality before the law is based on the idea that people who are similar should be treated similarly. It implies that persons who are equals, i.e., people in comparable situations, should have the same right to sue and be sued for the same cause of action, and that this right should be available to them without discrimination based on religion, sex, caste, or any other criteria.

Following many cases, the idea of equality under Article 14 has undergone several revisions, and the current concept of equality today has a broader reach than it did when the Constitution was enacted.

In the case of Air India v. Nargesh Meerza, an Air Hostess was required to resign from her job when she reached the age of 35, or if she married within four years of starting their job, or if she became pregnant for the first time, whichever came first. The court determined that terminating an air hostess’ employment on the basis of pregnancy was discriminatory since it was an unjustified justification for termination.

Article 14 has two key aspects: equality before the law and equal protection under the law, both of which are vital. The additional dimensions of Article 14 have been established by the courts, and the major aim of Article 14 is to eliminate any arbitrariness that may occur in the activities of the state. As a result, this Article now has a considerably broader reach than it did when the Constitution was enacted. As a result, several judicial decisions have broadened the scope of this article.